Embracing Wim Hof... (well, not actually - social distancing and all that)

One of the most notable changes to have happened to me over the last 12 months has been a realisation that we are capable of so much more than we usually believe. A friend and fellow runner (one of these super fit types who does Triathlons) was talking to me recently about the Wim Hof Method. At this point, I am hoping you haven't just opened a new tab and typed in 'Wim Hof Method' into the search bar - because if you have, you probably won't finish reading this. If you've gone already, please do come back!

The reason Wim Hof came into the conversation (and I'll come back to him later) is we were talking about the statto stuff that I really enjoy learning about. If I tell you that two men with a combined age of around 100 were discussing resting pulse, VO2 Max levels, Max Heart Rate and Training Zones, you'll get the picture. If this stuff really doesn't interest you, maybe skip this paragraph, skim down the page for the name WIM HOF and then carry on! One of the things we were talking about was training zones - his Personal Trainer  (and no, I haven't) has been encouraging him to try to maintain heartrate at a much lower rate when running which, to my mind means running more slowly (which it does...but for longer). So instead of going out for a 90 minute run and blasting as fast as he can, he goes out for 90 minute run with the aim of not going over 140 bpm - this is his magic number for the end of the cardio zone and the beginning of 'Peak'. Seemingly the theory behind this is that building stamina and training your heart to work at a lower level will help you carry on for longer. I absolutely see this if training for a triathlon with all that entails, but not convinced yet that it's the best way for me - I'd be virtually walking! What on earth has this got to do with the Iceman (I can't type his name yet as those skimming will get cross)? It's where the conversation headed to next - via VO2 Max levels and resting pulse. I'm even boring myself typing this...but there's a point and I will get to it. I've noticed since September that my resting pulse has increased and, consequently, my VO2 max has declined slightly. Nothing worrying or dangerous as my resting pulse averaged 54 over the past month - but it was 47/48 last summer (I was running more and quickly, so was fitter). I mentioned that I felt the only way I could run more quickly was to increase my VO2 Max and reduce my resting pulse again (I have just glanced and as I type it is 54) to below 50 consistently. And that is when the big reveal came...

'Have you heard of WIM HOF? (In bold for those who are skimming - welcome back!)

My answer was no - but I was soon being filled in about a 61 year old Dutch man who has trained for many years and has earned the nickname 'The Iceman' due to some of his feats of endurance in the harshest of conditions, such as running a marathon barefoot inside The Arctic Circle. There are loads of documentaries around about him - You Tube is a good starting point. He is a holder of 26 World Records and builds his stunning achievements through a belief in a three point plan, which is known as 'The Wim Hof Method'. I'm not the kind of person to jump headlong into fads without doing my research. I've never been on a diet, none of this kind of thing ever makes sense to me, but a lifestyle change is different. So Step 1...buy the book. The Wim Hof Method, Activate your Potential, Transcend your Limits is the title of the one I bought, although there are a few to choose from. At this point, I am interested, but remain at heart a sceptic - and can't stop myself calling the book The Duckworth Lewis Method (there's one for cricket fans!)

There are 3 main 'pillars' of the method:

I'll talk about each one individually in different entries - starting today with cold. 'A cold shower a day keeps the doctor away' is the main phrase. In a nutshell, the theory is that we as a society view cold as our enemy, preferring warm comfort, and in doing so, we inhibit our vascular system, and to reignite this, all we need to do is to take a cold shower every day (at least 5 times a week anyway). Sounds punishing - cold is relentless and harsh - would I be able to handle this? What are the benefits? In theory, this will lower stress, anxiety, pulse rate and consequently improve my VO2 Max - which should in turn improve my running speed. The plan suggests that for the first week, aim for 30 seconds at the coldest setting on your shower at the end of a warm shower, after a week, go to a minute and increase this so that after a month you are up to 2 minutes. Day 1 comes...warm shower, then spin the dial down to the coldest setting. First response - sharp gasp and intakes of breath. This lasts for about 10 seconds or so, and suddenly I feel my body adjusting to this. 30 seconds was fine - no problem. Day 2...same, 30 seconds and out. By Day 3, I had started to wonder if accelerating through the programme would be a good idea, so timer at the ready, I turned it down to 0 and closed my eyes. Work through the first ten seconds, deep breaths and then...relax. Let the water envelope the body and enjoy. Of course, I'm loosely timing this, so I decide to glance at the stopwatch - 1:30! Excellent! At this point, I decide that a 4 week programme can become 4 days and moved to 2 minutes from Day 4. It is now Day 7 and I am sticking to two minutes for now. Eventually I will take this longer, but for now - 2 minutes is enough. So what has the impact been? Difficult to pinpoint whether the showers or the breathing are the ones having the impact, but resting pulse graph over the last 30 days looks like this: 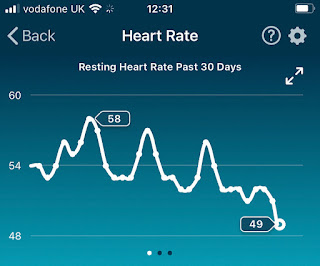 This has been inconsistent over time and much depends on what I am actually doing on the day - for instance the one where I am at 58, I had been on the phone most of the day, walking around. Not enough to register as active, but still enough to raise the pulse slightly. Over a 3 month period, the average has been 54, so when we take the last week (I am now on Day 7), I have been below this and for the past two days, have been 50 or below. We will see whether over time this is maintained. The other impact is on VO2 Max - this is estimated by my Fitbit taking into account all sorts of information - weight, BMI, Pulse when resting, sleeping, running etc. I think the estimated range this gives me is on the generous side. A week ago, it was 58-62, today I look and this has moved to 60-64, the highest it has ever been and certainly high for someone my age. Is this the showers? The breathing? Placebo effect? Who knows. For now, I am enjoying the new regime - it is far too early to tell what the impact on running and overall wellbeing is, but watch this space!