The Finishing Line is in sight

The end is now in sight! As mentioned in the previous entry, I'm now in the position where, to quote a wise man, I 'won't get any fitter, but can still get injured'. With 2 weeks to go, I have completed one last long run and have no plans to run anywhere near that distance (just short of 19k) between now and the day of the #GNRVirtual

So how did it go? An early start meant the sun was up, but it was cool. There was a slight breeze - so conditions were pretty much perfect. The route planned was, by the standards round here, pretty flat and was a route I had done a couple of times in Late May/Early June. Last time out, I completed this course in 1:48, and average KPM of around 5:30. Targets are important to me and really help while I am running, checking my watch occasionally helps me to retain focus and positivity. It also serves to give me the occasional kick up the backside that I might need to ensure that my pace doesn't drop too much in the middle section. In cricket terms, my running often mirrors a One Day International - starts off quickly, finishes well, but the middle overs can be a bit of a plod. This is something that is regularly seen in my splits. All too often the first km and the last km are the fastest ones, with those just coming up to half way usually the slowest, whatever the distance. The watch helps me to keep an eye on this, even though the readings are not quite as accurate in hilly areas. Back to targets... 1) Maintain improvements to cadence. On shorter runs I am up to 170 SPM, but on a run this long, last time was 160. I need to do better in this regard, and be up around 165 - ideally a bit higher. 2) Time targets - below 1:45 is an absolute must and my real aim would be to go below 1:40 - hopefully down towards 1:37/1:38. That is getting closer to the 5:00 per km mark, which I seem to be able to do on runs that are up to 12/14 km. 3) Don't hurt myself - push but don't strain.

So, targets set, processes followed - warm up done, all seems in my favour. There's just one slight issue - a  tightness in my groin running down the back of my right leg. It isn't stretching out and all I can hope is that when I set off, it will ease. Off we go...the customary quick start sees the first km covered in 4:12 and we are through Whalley in a decent time. At this point, there is no sign of any pain from anywhere, which is an unexpected bonus. Up hill now as I go through Barrow towards Clitheroe and as I turn onto the main road into Clitheroe, the time is indicating below 20 minutes - just over 4km covered, so a solid start. Feeling good at this point, the next stretch is long and straight, some undulations, a mix of up and down, but nothing too hard. I turn down Greenacre Street and pass Holmes Mill - 32 minutes on the timer and still going well after 6.3KM. Still feeling full of energy and pain free. I'm actually enjoying it! Usually I am only aware of enjoyment after the run ends..this is a new feeling. Of course, at this point, something is about to go awry, isn't it? What will it be? A fall? An injury? A sudden urge to go to the toilet? Or... a train. Yes - a train. Looking up, the level crossing comes down and the traffic is building up. Maybe by the time I reach the crossing, the train will have passed...but no, it hadn't, so a quick diversion into the park at the Castle Grounds is all I can do. It slows me down, but not by much, a 100m or so in and out, quick turn round and off I go again. Of course, this has a bit of an impact on how far I have run by the time I am at certain landmarks, so calculations of how close I am to previous times are inaccurate. In a strange way, this helped as I think over then next 3/4KM, the running improves massively from the previous time out. Past Edisford Bridge and up to the dreaded climb to Bashall Barn. Today I didn't feel myself slowing down too much at this stage (looking at the splits when home, these 2km were done in around 5:15 each, was nearly 6:00 last time) and as I hit the 10k, just over 48 minutes were on the clock. A decent start - time to keep it up. After another km or so, I felt my pace drop and needed to kick on - gave myself a talking to and upped the pace. The sun was fully out now, with nowhere to hide here, but once I turn back towards Whalley, there are trees and the shade was welcomed.

The rest of the run is a bit of a blur to be honest. I remember hitting 16KM in around 1:19 and feeling ok, but once I hit 17KM, my tight groin started to ache, this was definitely tightening up now. At the end of this route, there are 3 possible ways to go - one will take me to the full 21KM, 1 will take me to 19.5KM and the other option... I've never done, so I don't know how far it will be. Truth be known, I have gone far enough, so I take option 3 (shortest route!) as injury prevention. When I arrive back and log the run, the Bluetooth measures the run as 18.8KM, my watch measures it as 19KM, so I settle for the shorter of the two distances and what does the time say? 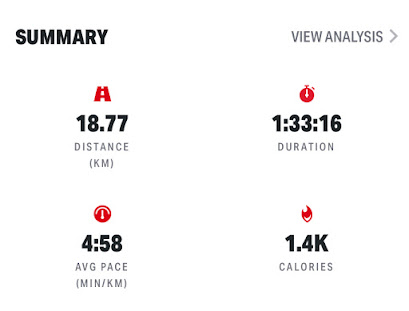 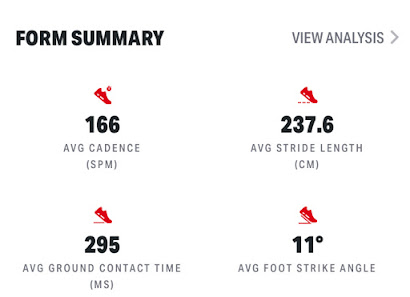 I can't quite believe this time! Less than 5:00 per KM on this distance goes way above what I expected or even hoped. The increased cadence has made the difference, and the pace of the run is pretty consistent throughout. The uphill drag to Bashall Barn is the slowest part, but it's uphill for some distance, so it will be. Last image here is the splits. First 5KM and last 5KM. This is what I am most pleased with. My groin was tightening, but the pace was pretty much maintained from start to finish. 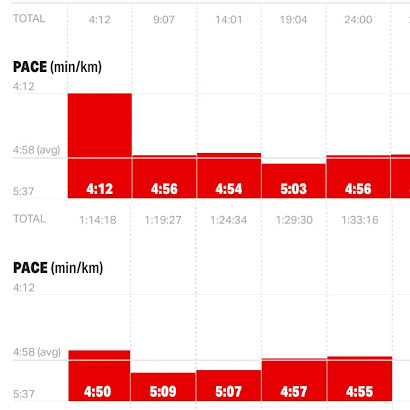 So what now? A few days rest - hopefully a couple of gym sessions and light running for the next couple of weeks. I'm considering a couple of 1 hour runs, try to maintain that 5:00 per KM pace and then by 13th September, I can get this virtual race run and give my body a real break!