It was all over in the blink of an eye. Not literally, otherwise I would be a world record holder. Looking back on Sunday, a couple of days later, each section of the run almost feels like some part of a surreal dream. I'm going to try to capture what went on on #GNRVirtual day first, and finish off the blog with some reflections on the past 6 months and what I have learnt throughout. There is no doubt that the COVID-19 pandemic has had an impact on the world, but learning to run through this has been, well, let's just use 'interesting'.

So Sunday, Great North Run Day...in a way. I had long since got my head around the cancellation of the race, and reconciled this with the plan I had for a Ribble Valley route. My initial idea was to get up into the hills and really challenge myself, but when I looked at the actual GNR route, it bears no relation to Pendle Hill. Anyone who has driven, cycled or walked from Pendleton to Sabden up past The Ski Club will know that taking that route would be madness. I wanted a comparable route to the GNR, not a punishment! I settled on a route that would constantly undulate, some steep climbs, some nice flat sections and even one or two gentle downward inclines. It needed to be a peaceful route. I am still making every effort to maintain social distancing and therefore heading into the countryside was a priority for me. Part of the joy in running is the solitude, a big part to be honest, so a jaunt towards the Trough of Bowland was in order. I am conscious that people who do not live round here (hello to the Argentinian readers by the way) will not know any of these places, but for fellow Lancastrians, some familiar names help to put this into a context. So... Billington, Whalley, Barrow, Clitheroe, Edisford Bridge, out towards Bashall, back towards Chaigley, head back to Whalley via Mitton. The main loop itself is around 20k, so I had to put some extra little sections in (more of that later).

The morning arrived and the weather forecast was excellent. I was not going to use the ViRace App, but go with Fitbit and Bluetooth on trainers for timings, splits etc. My routines don't change on a long run like this. Well hydrated for 2-3 days beforehand, loads of energy drinks (Science In Sport Electrolytes - not Red Bull or Monster!) and plenty of lean proteins and carbs. On the morning of the run, I don't overeat. A single protein flapjack (I like Pro2Go, although Graze also do some excellent ones), a strong coffee and the secret magic ingredient just before setting off. A 250mg caffeine pill so stave off any muscle fatigue. Managed to allow time for plenty of core work to protect and strengthen my weak areas and by 8.10am, I am ready to go. This morning the stretching was doubly important. Not only was I running further than ever before, but over the past couple of weeks, some tightness in the left calf and hamstring had been apparent and in recent runs, I had also had some twinges in my lower back. These are all connected, so making sure the preparation was right is really important. 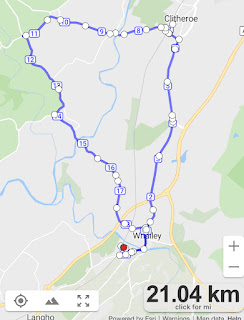 So how did it go? Well...let's start with good news, my initial pace was good, nothing was hurting and as I hit the 1 km mark, the time seemed about right. The first km has more down than up, so anything below 4:30 is fine and on Sunday this was 4:15. That was when the first strange thing happened. I had no energy and my legs felt like they didn't want to move. No panic, I've got 4 gels with me, maybe I'm not as hydrated as I should be. I tell myself to crack on, and keep running at this point, as I didn't want to waste a gel so early on, but a couple of minutes later, I succumbed. 7 minutes in and I've had the isotonic gel I was planning on consuming at the 3k mark. Not to worry, if I leave a decent gap after this one, it'll be fine. So the gel consumed, I get into what feels like a good rhythm and after about 4km, I'm feeling pretty strong. A glance at the watch tells me my time is decent and as I hit the 5k mark, I look to see the time that has elapsed. At under 23 and a half minutes, I am concerned that I am going too fast and won't be able to maintain this. I go back to March, when I first started this adventure, and 5k was taking me over half an hour. The other little voice in my head is telling me to speed up, keep going, run at this pace and I'll be done in 1:40, even allowing for some tailing off at the end. 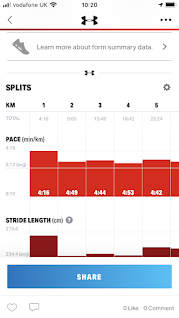 At heart, I am a competitive soul, so I tell myself to keep going at the pace I am going and see where it takes me. The pace is maintained into Clitheroe, turn left past Holmes Mill and head towards the Level Crossing. As I said earlier, I knew I had some distance to make up, so decided that going into the park in the castle grounds and going through and back would add around 600m (and is flat) so quickly did this, consumed the second gel (caffeine one) and got onto the main road towards Edisford. At the point of running past Roefield Leisure Centre, I have covered just over 8.5k and time looks good. I'm too tired to do the maths but it was around 40/41 minutes from memory.
From here on in, the run is pure countryside, so no pavements, hopefully no cars and no other people around apart from the odd cyclist (that is not to say all cyclists are odd). The next 2k is hard - not too steep, but generally uphill, this is a long stretch towards Bashall. It feels longer than it is - no landmarks, nothing to pass and I feel like I am walking. This is definitely slower than when I ran this route 2 weeks ago. As Bashall Barn appears on my right, this is a pretty big point, my watch vibrates, 10k done. 47 minutes. 47 minutes? That's my fastest ever 10k. This is the point at which I hit 'the wall'. This is such a psychological point, but I knew that I had a tricky couple of km coming up, I have set off too fast, I'm utterly exhausted and, unlike on a normal run, there is no get out clause. I can't just stop, walk for a bit, get a lift home. There's no option but to carry on. In my pocket I have got 2 gels, one more of each type, and a chocolate protein bar. That's no use as the sun is out now, it's hot and I am thirsty. Eating this would not work at all. I have, however, for the first time, brought another bag with me, containing two strong painkillers (in case of the back/glute issues flaring) and another caffeine tablet. I've never taken two before, rarely do  I bother with any, but on this occasion, I wonder is it worth a try? I have it in my hand and it looks huge. My mouth is dry and I'm not convinced it can be swallowed without water (which of course, I do not have). While having this internal monologue, I decide to give it a whirl, pop the tablet in and (eventually) it slips down my throat. I can't say whether or not it helped because the next 3 to 4 km are nothing but a hazy memory. I remember it was hot, there were lots of cyclists out and every time I found some shade, I ran in that for some respite. It was probably only about 15 Degrees but there was no breeze at all. Next thing I remember is turning left towards Mitton, done around 15k by now and as my mental capacity diminished throughout the run, have no idea what kind of time I am going to finish in. I felt ok again, and was running around 5:00 for each km. This felt ok, one more gel...kick of caffeine and carbohydrate and that should see me through.
What I had not allowed for in this case was that as I ran past Mitton Hall, with just over 4k to go, that mentally, I was done. Suddenly my legs would not move, my quads began to feel like they were burning and both hamstrings tightened. What made this worse is that I knew I could take a short cut and get home in less than 3k from here, but I needed the extra distance. I needed around 400m extra so even the full loop wasn't going to be enough. What is there left to do at this stage? Just run. Slowly. I slowed the pace right down and as I ran parallel to Calderstones Park, I actually felt like I was going backwards. I know this is all psychological as I ran 19k 2 weeks ago with no real issues, but I really struggled to get over this. Gradually I ate up the distance and as I headed into Whallley, I was 1 km from home, but still had 1.6k to run, so a left turn back towards Clitheroe for a while, turn round and run back - should be enough. This was another turning point, although energy levels were low, I knew now I had this covered. All I had now was the spectre of Whalley Road towards Billington ahead of me. When planning such a route, leaving a long steep hill to finish probably wasn't wise, and as I crawled towards the final turn, took one last glance at my watch to check the distance - I'm still short! Only one thing to do...carry on up the hill for a while longer, turn round and then back down the hill. I haven't mentioned time for a while - by the time I had reached 15k, I had stopped caring about that, so hadn't looked at the time, just the distance. I would love to say I sprinted to the end, arms aloft, celebrating, but it was definitely a stagger. 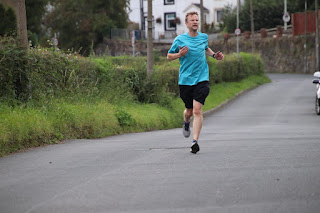 So what was the time? Well. I'll start with targets. I always have 3... 1) Absolute minimum expectation - for today this was 2 hours, still way better than I would have expected a few months ago 2) 1:50 - This is the target I shared with friends - what I may realistically expect to attain 3) Aspirational target - just me, nobody else finds out this target. Today it was 1:45, which is bang on 5:00 per km. 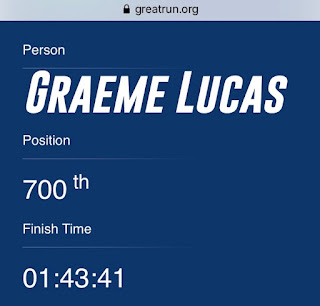 I am absolutely thrilled, amazed, shocked and many other adjectives to think that I could do this (although this was, to use my own words, never about the time)  I have learnt so much, not only the science behind running, but about what we are capable of, about how to push limits without taking risks. Most importantly, the core reason that I took on this challenge was to make a difference. I am going to do the Great North Run for real next year, once my feet have had a good rest, and will continue to do all I can to raise much needed funds for my chosen charity Shelter. So far, through kindness and the generosity of many, between us all, we have raised approximately £2000 when Gift Aid is built into the calculations. If you wish to support this and make a donation, please click the link below, share as widely as you can via Twitter, Facebook, Instagram or any other social media platforms that you use!

Thanks for reading, supporting, encouraging and donating. The kindness of others has really helped to motivate me to do this. :-)