Is your run going ahead? Plans...

I haven’t updated the blog for a while, and the reason for this is that I wanted clarity on the current situation and some future plans prior to publishing again. Later on in the blog, I will update on some recent runs, injury scares, along with the usual stuff about the difficulties of running up hills no doubt, we shall see.

So, by now, everyone is aware that the official Great North Run 2020 has been cancelled. In the current climate, this has to be the correct decision. A lot of people seem to have forgotten we are in the middle of a global pandemic and complacency around social distancing is kicking in. Wearing face coverings in shops has just become mandatory, and every other part of East Lancashire to the one in which I live has had restrictions placed upon them. We’re back to not being allowed to visit the homes and gardens of family and friends. That said, going to the pub is still allowed, so those calling it a local lockdown are well off beam. Anyway, I digress. The run is cancelled, and as I wrote at the time, it was always my intention to  run a half marathon on the day (Sunday 13th September) and I have a route planned. This was an individual decision and not connected to Great Run or my friends at Shelter. This has all been planned for some time, so isn’t really news. However, my entry will be official as the GNR people are working on a virtual run, follow the #greatnorthrunreimagined hashtag to see more.. seemingly there will be thousands of others going off on a solo long run on that day as well.

For anyone who hasn’t seen my route, it is pictured below. 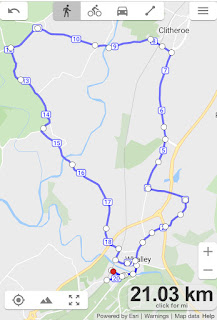 It’s an interesting route and hopefully on a Sunday morning, the roads will be quiet enough for me to get round without having to stop for traffic at any point. Most of the hilly sections are early on, and from about 11km onwards, I will be in the beautiful Ribble Valley countryside. This week, I have had a conversation with the running events co-ordination team and, thanks to all the kindness and donations received so far, they have agreed to simply ‘roll over’ my 2020 GNR to the 2021 GNR. This is great news for me as the issue the charity has is that they are really struggling for cash flow and having new runners next year would support them more in gaining a higher level of income. As things stand, the generosity of my friends and family has gained Shelter around £1100 and for this,  they are extremely grateful. The benefit of this for me is that my donation page, which can be found  at https://Https://uk.virginmoneygiving.com/graemeLucas1 will simply roll over to next year and will
remain open. I won’t therefore be under pressure to raise a certain amount of money to give to Shelter
as more than enough is already in there to cover the requirements of the charity (although it goes without saying, any donations made will be warmly received!) So great news! I’m doing my first half marathon 6 weeks today and the actual Great North Run in 58 weeks time! Massive thanks to everyone who hasn’t contributed to enable this to happen.

What else have I been up to? Best place to keep up to date is Instagram (GreatNorthRunGraeme) as I tend to put pictures up after most runs. Main issue I have currently is stepping up the training as there is a real weakness in my left calf. Currently I cannot really sprint as a consequence of this, which feels like a muscular issue about half way up the calf. I don’t feel it when I am running generally but I get spasms in it every now and again, when sitting down sometimes, occasionally when walking, but if I try to run at anything like a sprint, it does feel like a muscle tear in waiting. With 6 weeks to go, this is causing me two problems. 1) Anxiety - every time I go out to run, I am nervous and edgy. I have now done three runs since resting this for a week, and yesterday managed 16k with no issues, so hopefully this anxiety will begin to recede from here 2) Times. This is having a big impact on my
times and/or distance run in a set time. As an example, the first km this week has been done in 4:56
and 4:52. I had this down to 4:30 consistently prior to the injury (4:08 once!). For me a fast start is important, if I start slowly, I never manage to speed up, whereas if I start at a decent pace, I tend to maintain it pretty well. This could make a 5 or 10 minute difference to my half marathon time if I don’t get it sorted.

Anyway, as mentioned earlier, I’ve done a few runs of late and seem to be settling on a pace of around 5:00 per km on runs up to 12k, but a touch slower on the longer distances. Timed runs have been enjoyable, a simple premise of setting myself a time, running in one direction for just over half of the time, then turning round and trying to get home within the target time. I did one of these earlier in the week, and allowed an hour. As always, I did the uphill thing first, and ran up through Langho and Wilpshire. Got almost as far as Wiltshire Golf Club in 30:30 and turned round. I should be able to get home within the time as it’s largely downhill that way. Trouble is, after 6k uphill, and a raft of wine floating around, my poor old legs were weary! Given the anxiety around my calf, I am also
trying to stay at a consistent pace. Struggling covers it... however, eventually, I found an extra gear
and made it home within the allotted time! 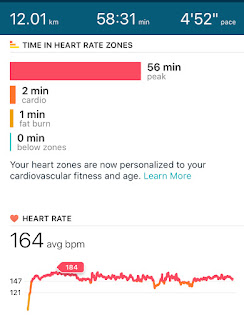 As you can see, I worked hard for an hour and made 12k (just). I have put the diagram of the terrain on to show how challenging that run is! Most important thing here really is that I had no after effects of the run, and everything feels ok. Well, by ok, what I really mean is no worse! That means a longer run is next up...