As the title says, a month to go and my training plan has completely gone out of the window! I knew in all honesty that drawing up something as rigid as that would not work. The trouble is, to echo the message from a very old entry...I know my own body and there are times when a short run doesn't really cut it. Equally, there are times when I am too busy with other things to do the longer runs. What I also realised is that when the weather is hot, a long run can only be done early morning. I have to say, first thing in the morning is my favourite time to run. There are fewer people around, which helps with social distancing, it is cooler and then I have the rest of the day to work, or relax if I am on leave, as I was last week.

A week off was something to be enjoyed and gave me an opportunity to get out for a couple of longer runs - I decided to do a couple of 16k runs last week, both different routes, both with challenge and hills involved. The first one is the one I have done a few times, previously my best time was 1:23 - which I had got down from a previous 1:32. My hope for this was to hit 1:20 - a solid 5:00 per km over a long run would make me feel I was on the right track. 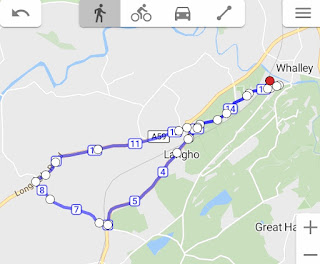 The map my run website has this measured as 15.6 km, whereas the Bluetooth in my trainers and Fitbit measure just over 16 km, so it's near enough. I'm not a professional athlete, just an old guy trying to get a bit better at running, so in reality, I'm not that bothered! Anyway, I know this run well and I know the first 6 km are difficult and pretty constant in the incline, so that's ok. The danger there is that I run this section slowly as I know there's some good downhill to come between km 6 and 8, but I then am in a rut and cannot accelerate. This run I will remember as the first long run where, however tired I became, at no point did I hit the 'I can't do this' wall that is my usual barrier. I felt good, ran ok - nothing earth shattering, but made it home in 1:21 - a bit slower than I had hoped but nonetheless, pretty pleased.

What I am also noticing now is that following such a long run, my body feels ok afterwards. Initially, running these distances (actually running any distance), made me hurt for days. I recall the day after the first time I had done this run, I could barely walk for 2 days! Now, I am ok afterwards and, apart from a bit of muscle fatigue, the next day feels fine. So I make the decision that definitely another 16k is on the cards a couple of days later, so I plan a route. Well, I plan a couple of routes in honesty. Plan A is full on torture, Plan B is 75% torture. Both involve Pendle Hill and sharp climbing and the decision of which route to take would be taken at the 8km mark, which is the point in the run where I have climbed 250m and the decision is either to keep on heading up for another km, or turn round (cattle grid near The Wellsprings if you want to google the images to see how high it looks!), head back down towards Clitheroe and have a run along the cycle path and back that way. Of course, there are positives of both. If I carry on, I know that  after the Nick O' Pendle, there  is a very steep downhill section where I can really accelerate, but this brings into play the risk of damaging something. I am also wary that I have still got a dodgy calf and decide at this point, to take the slightly easier option. I know. Cop out. Anyone who has been up there, even in a car, will have felt the pull, so I'm calling myself sensible not soft. I turned round, 8km under the belt and headed back down Pendle Hill, a lovely run and the sun had just come out. At least on this occasion, I had not opted for the black long-sleeved compression top! As I reached the A59 (newish mini-roundabout, just east of Clitheroe), a seemingly innocent roadsign got into my head and gave me some torture. All the sign noted  on a right turn was 'SKIPTON'. Don't get me wrong, I like Skipton, but the thought that this is being indicated on the road sign, on its own, spooked me a bit, I have to confess. It's Yorkshire...that means I must be miles and miles from home. I'm not going to be able to get back - I've underestimated the distances involved (etc) I also had a problem crossing the road due to the amount of traffic, so this added a couple of minutes to the time. After this, I started running again, and got a decent rhythm going for the rest of the run. This was always going to be slower than the other route, however, and I made it home in 1:23:36 - which I was pleased with overall, especially considering the amount of climb, through Wiswell, on to  Pendleton and then up the hill. 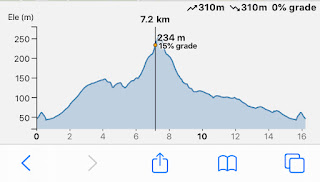 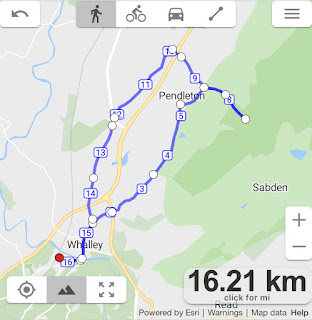 So now...a few days rest, see what happens and with less than 5 weeks to go, I have probably 12 training runs left before running 21km for the first time. I think the next couple of weeks, I'll do a couple more 16k along with some 1 hour runs - see if I can get beyond 12km in an hour. I doubt it very much, but it won't be through lack of trying!