With less than two months to go until 'The Great North Run Reimagined', I decided it was probably time to bite the bullet and develop some form of training plan. Right back in March, when I set out on this adventure, I read a great deal and the common advice was 'do a training plan'. I really didn't want to go down that route and have such constraints put upon me. As stated in an earlier entry, I know my own body and was not prepared to work in a way that made me feel like I 'had to' run if I needed rest. However, over the last few weeks, with a combination of poor weather, work, tiredness and out and out laziness, most of my running has been short distances. At one point, 4 consecutive runs were 5k. Not belittling the 5k run as it is great for building lung capacity and speed, but just doing this isn't going to help me do my first ever half-marathon in September.

I decided that I needed to get over this and start to step up the distances...as well as seeing if I can now up the regularity of the runs. Thus far, 2 runs per week has been my general pattern and is usually one short (5/7km) and one longer (12-19km). Occasionally I have been tempted to do two longer runs to beat the previous time, but following these, I have needed longer recovery. When I look at my own discipline, it is waning slightly, so at this point, I sat down to draw up a training plan. One that would give me some flexibility, to stop me getting bored, bogged down and doing the 'same old'. What I could not do is put days of the week against runs - too many variables, so I have done the below table as a guide. I am now onto week 2 and have already changed from the plan. You will see on w/b 13th July that a 10k is in the plan. In the original, it was 7k...but I set off and just felt good, so I ran further! (more of that later). Hopefully this will give me enough structure and enough miles in my legs to finish my route in a reasonable time on 13th September but gives me enough freedom to choose, to swap things around and to change things up or down if I feel it isn't quite working.

As soon as the official run was cancelled, I started looking at options. There was no way I was doing all this training for nothing. Too many people (THANK YOU!) have given me words of encouragement and have donated to Shelter for me to just say 'oh  well, there's always next year'. The Great Run organiser have also decided to carry on with the 'reimagined' theme and I will learn more about this in early August. From a running point of view, living in Ribble Valley brings challenges - in the form of hills largely - getting into the middle of nowhere and maintaining social distancing is less of a challenge, and for me (I don't know if this is typical or not...) I get really irked if I have to stop to cross a road (it interrupts stride pattern and breathing) so planning a route with the fewest possible road crossings was important to me. What else did I want? Some challenge...not too flat, but hills at the beginning, I wanted some countryside. Nothing beats running on quiet country lanes. I also wanted a loop - to start and finish in the same place with the smallest amount of repetition. The final decision rested with familiarity. One of the routes I looked at would be a brand new route...in a different direction to where I usually run, but one that could only be a the full half marathon and no shorter alternative I could use as a trial. With all of that in mind, the following route has been chosen: 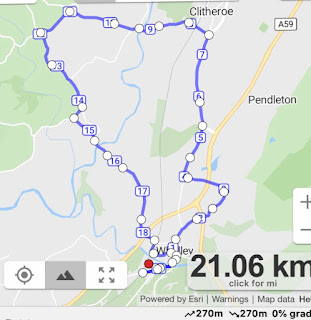 Here we go... Billington into Whalley, up to Wiswell, back down into Barrow, into Clitheroe, down past Edisford Bridge, up to Bashall Barn, then back towards Whalley through Mitton. It's a fantastic route with challenges galore! As you can see - over the first couple of km, there is a 120m climb, which is the highest point of the run. From there, it isn't exactly what you would call flat, but any climbs and descents are relatively short. Looking at the bottom picture, the worst part is going to be the climb just after 15km and of course, the final pull at the end! For those who know the route, the uphill sections that you can see are firstly, from Whalley to Wiswell (at the beginning), then up through Barrow towards Clitheroe, with a couple of steep ones - one around 10km, which is near Edisford Bridge and then again after 15km, which is near The Aspinall Arms in Mitton. As it is a loop, the ascents and descents are equal, so it seems a fair route to challenge myself with.

So what have I been doing to prepare... a few little runs, nothing major so far. Last week I did 2 x 40 minute runs where the challenge was run for 22 minutes, then turn round and try to get home within the 40 minute limit. I didn't manage on either occasion, but in 41 minutes (roughly), I managed between 8.3 and 8.6 km. The highlight of these runs was running my fastest ever km - 4:09 for the first km of the run. If you look at the picture above, it is the same first km - starting with a sharp uphill, then equally sharp downhill. I looked at that and thought to myself that I will probably never better that!

Run 3 was an early morning run - cool, cloudy and a light breeze. Perfect conditions and I decided to follow a similar route to last week, but to run for 23 minutes and try to get back in 45! See how far I could go in that time. Anything over 9km would be just fine. I set off quickly and felt good, all the old injuries causing zero problems, which is always encouraging. Up the hill into Wiswell and towards Pendleton. There are some HUGE properties up there! One of the weird things on that route is that is all feels uphill, with a few flatter bits once you are through Wiswell and heading for Pendleton. Nothing strange there, until you turn round and come back...and it all feels uphill again! Anyway, I get further than last time and am just short of Pendleton at about 23:15 and I turn round for home. Recently, I have adjusted the stride length on my watch and it now gives an accurate picture of the distance covered (splits not really as it works on cadence and doesn't calculate differentials in stride pattern - it would if connected to a phone...) so I am looking towards 46/47 minutes if I make it home in a similar time. Difficulty is, the last section covered was steeply descending, so as I turn round I am faced with a sharp incline for about 400m, which is a bit brutal. Once back in Wiswell, there is a lovely long downhill section down to the main road and I get to that in a reasonable time. 2km from home...7.5km done, 37 minutes on the clock. At this point, I make the call that once on the home straight, I will continue up past where I normally turn for home and run another 250m or so, to bank a 10k, rather than a 9.6k run! Problem there is the road is steep and pulling up there is always hard work (look at the last section of the half marathon diagram...it's that 'up' bit but for some reason I voluntarily extended it!)

So onto weekend and according to the training plan, I have a 12k run planned. We'll see...