A week is a long time in training...

I didn’t add anything to this blog last weekend, and for good reason. I ran on Sunday morning and it was a failure, a disastrous run in many ways and the harsh voice of the inner critic was very real, telling me that was it, I’d hit the wall, peaked too soon, not as fit as you thought, etc etc. You get the picture and I didn't want to write about it. I’m not going to dwell on this, but a bit of background is needed.

I’d decided to give myself a Saturday morning off and enjoy a lazy morning at home with my family, which meant a run on Sunday. Now I like routines, but moving from Saturday to Sunday couldn’t make that much difference could it? I had decided a short run only as the weekend started early on Friday night and we had a few drinks Saturday as well (I know...) Anyway, onto the standard 7k loop...and a target of beating the PB by smashing up the hills and hitting the first 4K hard. Started off well, body felt good, no pains, aches or potential injuries. In fact everything was fine until I consumed the gel half way up into Wiswell, as normal...it just didn’t settle well and although after 4K I was flying, I really did struggle thereafter and was a couple of minutes slower than previous runs. Sunday runs...maybe not for me!

If you fall off a bike, you should get back on immediately, so the saying goes, which is what I did. Wednesday morning, early morning...no wind, cool, dry and since Sunday, I had been hydrating properly and was well prepared. This was the chance to set a new PB and prove to myself that there was still some improvement in me. I took the same approach, as fast as possible to start, and covered the first km in 4:25, by my standards very fast...then up past Oakhill and a glance at the watch as I approached the main road gave me a boost. Below 10 minutes for the first time, but then...disaster. It’s not even 8 am, but the traffic on the main road is awful! I have to stop, wait, look both ways and, following the green cross code, walk across the road sensibly. Problem now is that, having gone through the difficult first 2k and just got myself breathing properly, I have to do it all again, and this time, uphill! I have paused my watch, but there’s no hiding place from the official timer, which is the Bluetooth in my shoes! We will see what impact this has later...and I won’t know until then. Onwards and upwards...into Wiswell and through the other side... 15 minutes, now a km downhill...enjoy it, lengthening stride and kick on. Time is good and I am on track to beat my previous best of 34:13, but will the extra 30 seconds at the main road prove costly? As I hit each mini landmark, I feel the time is good and when I hit home, a glance at the watch shows a time of 33:29, but that’s not the official time, so I have to wait...

33:46! Great news, back on track...and an average pace of 4:49, which is really pleasing for me. With this under my belt, all being well, I will have a longer run on Saturday morning. Splits show decent pace up the hill as well (KM 2 and 3...with a 20 second or so stop on KM 3 for road crossing!) 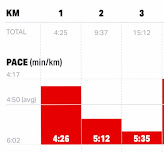 So where to go and what to do? I fancy doing a run I have done before, but not for a while and then I can see if improvements have been sustained. I also want something reasonably flat - not that this exists in Ribble Valley, but in the end settled for this one: The map website says 15.78 km - so with social distancing veering and road crossing, that covers 16k - ten miles (Trainers say 16.1 km) It's not flat and as you can see from the picture, elevation over the first few km is pretty steep. I have done this run twice, but not for a while, and my last run here took me 1:32 - so the obvious aim here is that I have to go below 1:30, but I have another target in mind - 1:25. From memory, I had a few issues on this run last time and was really slow at times, ran out of energy, so realistically I am hoping I can take 7 minutes off that previous time. It's a stretch, but I think I can probably just about do it.

The difficulty with doing a run that I haven't done for a while is remembering where I was at previous time points last time - I have only one definite point, which is just past The Bonny Inn in Salesbury. Last time, I hit 45 minutes. That's really the only indicator I have but my theory is if I set off quickly, I'll then drop back onto the same pace as last time and will be fine. All the usual routines followed, hydrated and energised, I set off. Bearing in mind the first 6k of this run is pretty much all uphill, going off at a decent speed is going to be a challenge, but as I hit 3k, I am under 15 minutes, possibly too quick and I may well pay for that later. On return home, looking at the splits, the first km is 4:47, whereas in this direction previously, I have been looking more like 6 minutes, so yes - a fast start. The good news is conditions were good, warm but not hot. No wind, no downpours and, as it was pretty early, very quiet out and about. As I said, I had no clue about how fast this run was until a point which is not far off half way, but after 3km, with more climbing to do, my legs ask me to slow down. Well, they don't ask - they more, well, just do exactly that. Muscles in my upper thigh start to feel weary and I'm wondering now if the fast start was a good idea. The good news is that I know that soon enough, I turn down towards Salesbury and get a nice (but short) downhill section to recover some energy and from there I can get back on to running at a decent pace. As I pass the landmark that was 45 minutes last time, I take a quick glance at the watch - 39:20 - nearly 6 minutes faster - that's over a distance of about 7.6km so a decent run so far and a decent time. This gives me a lift and running down from there to Longsight Road I am confident now that this will be a decent time. Energy levels are back up again, not a sign of any aches and pains. I'm now hot (sun has come out) and thirsty, but that's ok. The difficulty with this run I think is that once down onto the A59, the road towards Northcote is long, has more climbs than I anticipate and has few landmarks...I can count them, Yu (Chinese Restaurant) aside, the next mark of note is Langho FC on the right, and looking at the times on the watch, I am on this stretch for 20 minutes.

What I am finding is that long, straight stretches where there is no sign of change are the points in runs when my energy dips, and the internal struggles begin... I don't think it is boredom that is the enemy. I have said that before and I am certain this is the case. It reminds me of when I used to drive to Lancaster every day for work. Had it all been motorway, it would have seemed longer, but breaking things down into chunks makes things feel less mundane, and ticking landmarks off on the way gives us a more rapid sense of progress. This road does not do this...it's just long. As I hit the 10k mark somewhere just over 50 minutes, it's time for the secret weapon. Caffeine gel! I know that 75g of caffeine and 40g of carbohydrate is enough to last for 6km, it's now a question of trying to maintain something like a decent pace. Nothing can stop me...well, when I say nothing, what I mean is nothing apart from irritating sock issues. For some reason, after about an hour's running, my sock on my left foot seems to have moved and has a bobble that has gathered by my toes and is really uncomfortable. This is increasingly annoying and I take the decision that I have to stop and fix it. Stopping mid-run presents 2 main problems for me:

1) Starting again is hard...legs and lungs.
2) Time - my trainers time will keep on ticking and I might not hit the target I set

But stop I must, or my left foot will just be one massive blister later. I find a farm, lean on the gatepost, shoe and sock off, readjust as best as I can. The sock is soaked through, which makes this slightly lengthier than I hoped, and there is already a delightful blister formed on the end of the toe next to my big toe...such fun! Anyway, off we go again, back into a decent (ish) rhythm and let's see where this gets me. This section of the run was slow, it felt slow and as I went, had no idea of how the time would look at the end. With no landmarks, or memories of how the last run compared, I was completely in the dark! Eventually, I reached 'the roundabout' by Northcote and was on around 1:08 - from here it's around 3k to home, with undulations and a few steepish downhill sections, I  reckon 15-17 minutes from here. No more clock watching - focus on getting decent rhythm and let's see if I can shift a bit faster on the downward bits. I get a decent finish and once inside, sync the trainers and watch to find... 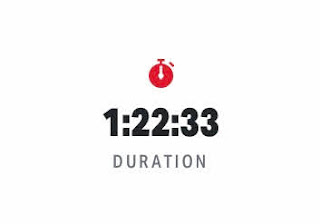 Now obviously, I have to be delighted with this overall, as I am well within my target time - at 1:20, I would be running 8 minute miles, which again would be another huge improvement for me. What I now know I need to work on is pacing myself properly - if I can set off a touch slower, but not much, could I then maintain a faster pace between km 10 and 14 (which were all close to 5:30 - too slow)? Or should I keep on setting off fast and just get fitter? Last time I started slowly on a long run, I still ran out of steam. Do I need to look again at nutrition? I used 1200 calories during this run, so maybe that's something I now need to look at again. Lots to think about...lots to ponder, but overall a good week following last Sunday's nightmare!

Thanks for reading again - feel free to comment below, check out
https://www.instagram.com/greatnorthrungraeme