Looking back over the past ten weeks, there have been occasions where I have read back through some of the past entries just to remind myself that training is going well for me at the moment. In many ways, staying fit and free of injury remains my number one priority, given my age and track record. In fact, it is pretty much three months since I got on a treadmill to tentatively ‘run’ for five minutes in the gym at 7km/hr  for the first running I had done since the end of the cricket season (remember them?) last August. A more recent blog entry talked of stepping up to 10k, 12k even 14k runs. When I mapped out yesterday’s run, around 19k, it’s fair to say that this would be pushing myself, and in all probability, I won’t do a longer one as preparation for The Great North Run. I had been advised on this run by a friend who told me this would be a good run for me, as it is ‘as near to flat as you’ll get round here’. 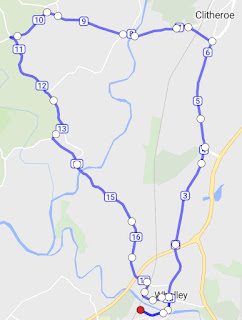 As you can see, a circular route, from Billington into Whalley, through Clitheroe via Barrow and then into the beautiful Ribble Valley countryside. Once past Edisford Bridge, we are into the wilds. The road heads towards Bashall Barn, and then a left turn, optimistically signposted ‘Chipping, Longridge’. From there, across towards Dunsop Bridge, then left back towards Whalley via Great Mitton and the long haul past the sadly fenced off Three Fishes and back into Whalley.

Nutrition is always slightly trial and error on a new run, but there are staples involved...coffee, 500ml Sports’s Drink (with amino acids) and, of course, flapjack. The flapjacks I like come in packs with three small slices, and on a shorter run, I only have two slices (35g) but for today I think the extra distance justifies an extra slice. Besides which, it’s Saturday morning and there are a few glasses of wine that need soaking up from Friday. On top of this, I load 3 gels into my pockets...1 of each type. Electrolytes first....Isotonic for half way through to make sure I stay hydrated and finally caffeine for the home stretch. It seemed sensible and my plan here was broadly to have gel one after 5/6k, the next one after 11/12 and then get to 14/15 see if I needed the third. Stretches and warm up done and I’m ready to go. One thing I have really noticed is the difference that proper targeted stretching makes. My issues with hip/gluten will probably always be there as will the abdominal weakness. Physio work has made a huge impact so before any run, I always really work the hip abductor, and get that opened up. Add in a few sit ups and some other bits and pieces around calf and groin and I’m good to go. If I do this, and maintain a good body position and form, these no longer have an impact at all during a run.

Before setting off this morning, some discussion took place around whether I should postpone for 24 hours. The wind is howling and one glance outside shows trees bending, but it’s dry...so I go for it. Of course, I have set a target time for myself, but there’s always flexibility on a new run due to the unknown aspects, terrain, number of roads to cross, slowing down due to social distancing...and on this one worrying about the level crossing in Clitheroe. The barriers always seem to be down when I drive that way, so it seems inevitable that I will be using trains as an excuse for being late...wouldn’t be the first time. Now doesn’t seem like the right time to start a discussion around renationalisation of the railman networks, so I shall move on, what I’m talking about here I see thinking up excuses in advance, any sports person will tell you, having the excuses lined up stops you from looking inwards and admitting you just weren’t good enough on this occasion. Target time... 1:50 but I’d settle for 1:55 and would be delighted with 1:45. This was determined based on previous times on 16k runs and a few other piece of information and also built on the assumption that the route was a flat one.

I set off at a reasonably slow pace, well when I mean slow, I was trying to find the right rhythm. In amongst all the other bits of brain clutter, I also have my virtual coach watching my every move, so am trying to run with faster steps and shorter strides. Apparently this will make running easier, especially if I can get my feet to stay in contact with the ground for a shorter time. A lot for my little brain to think about. The pace was ok though and the first 2k came through at around 10 minutes, which is fine, it’s mainly flat or downhill, so it’s ok. The wind at this stage feels blustery with the odd gust hitting me but it’s behind me when it comes. As always, I am struggling to get going...breathing isn’t quite right, legs feel heavy and by the time I am in Barrow, feel the need to take on board some carbs...gel number one, 3km sooner than I had planned for. Need some must and I tell myself that I’ll have next one between Edisford and Bashall. The road into Clitheroe provides further frustrations and interruptions to rhythm. It’s only pavement on one side, so of course my issue is caused by people. Nothing new there! I cross the road and run along the road itself with the oncoming traffic heading towards me a few times and cross back whenever it’s safe. Drivers were all very kind and gave me loads of room, but the constant shoulder checks, and coming back and forward didn’t help at all. It gets worse once into Clitheroe itself. It’s only 9am and the streets are busy. The run isn’t going well at all, I’m agitated and not feeling like I am running with any rhythm or consistency.  I’m still lacking energy but the times seem to be Ok. As I go past  Holmes Mill, I seriously consider turning left onto Woone Lane and heading home. It wouldn’t be my longest run,  but 13/14k would be ok wouldn’t it? Just at that point, I looked up, saw the Level Crossing up and took this as a sign, crack on. You can do this. Through the level crossing, no trains. Result. When I got to the end, Henthorn Rd was busy and stopping here for 30 seconds or so again interrupted my rhythm and, whilst waiting, consumed gel number 2. I’ve only run 7k.

From here, I had a relatively smooth 5 minutes, but the wind was strong and now absolutely in my face as I headed past Roefield, over the bridge and up the hill. There’s a pub on the bend and the left fork here is signposted ‘Whalley’. A left turn here gives me a 16k run and a shorter route home. Time to choose... I choose right and decide to keep on plodding. By this time I am really plodding as well, there’s nothing flat about this route and the next 3km are all uphill, winding roads and I am exposed to the conditions. The wind feels like it’s  blowing at about 40mph and I cannot see me finishing this run, let’s alone within my target time. With only one gel left, over 10k from home and self doubt eating away at me, I need something positive to help me and nothing is coming. People say that boredom isn’t the biggest challenge of long distance running, but for me it isn’t. It’s being so far from home, already exhausted but with less than half the run done. Exposed to the elements, no way of contacting anyone and the only way home is on foot. In short, self doubt. As soon as I pass half way, this always diminishes. After what seemed like hours, Bashall Barn appeared on my right and a left turn would be the boost I need, especially if I get so some ice steady downhill sections. That doesn’t quite happen, but it undulates quite gently for a while and I finally, after 10k, am running quite well. I hit 10k in 55 minutes, which is a pleasant surprise. It’s about the pace  I was intending, a touch slower perhaps, but this has been much harder than I had anticipated.  This was the boost I needed...and I kicked on. I took my last gel at around 12km, as I know it takes a little while to get into the system. Otherwise, I remember little from there. Sections of road seemed not as long as I thought, hills didn’t seem as steep and the wind died down (which was a shame as it would have been behind me. Fatigue started to kick in as I crossed the bridge and headed up Whalley Road, but I managed something of a sprint finish and finally made it home. That had been a battle and one that the unknown had led to me underestimating. Still, I’m home, I did it and am feeling ok overall. Time? 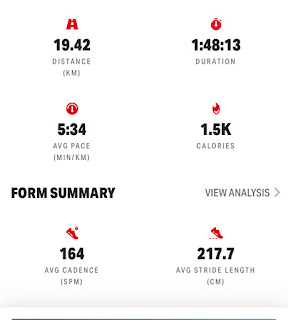 Overall I have to be happy. There were some very shaky moments where I lost focus and confidence, the wind was brutal but I stuck at it. I’m going to do that run again soon, on a calm day, maybe I can push towards 1:45..: who knows?