As I write this today, I am planning a long run for weekend and a few fun challenges for the next week, when work will be quieter and I have a couple of days off. After the big adventure over Pendle, and the excitement of new running shoes (see previous entry), I have done a couple of shorter runs. By shorter runs, I mean runs that a couple of months ago would have been tough, but now seem more straightforward.

The first one was a quick one on Wednesday morning before work started. The first run in the new magic shoes!!! Cut a long story short, I have sorted out the slow first km and am starting to push from the beginning. The run took me up into Wiswell, down through Barrow and is just over 7k - time was just over 35 minutes - came out as 5:03 per km (if the distance measured by the shoe is accurate - I think it may be 200m short but not splitting hairs). It's all there in the last entry - with graphs and everything!

With this under my belt, I decided to redo the 10k run that I have done a few times before. When I say 10k, I have never been certain on the distance. The first time I ran it, Fitbit said 10.3km, last time it said 9.3km, which indicates the longer strides associated with faster pace. Regardless of the distance, it's quite a tough run as the first 3k are uphill, then some flat and slightly down but from 6-8k another long gradual climb begins. It's the bypass between Northcote and Clitheroe.

Anyway...previous times had been just over an hour for the first one, second time was 56 minutes and last time out, 3 weeks previously I had headed down again to 51:32 - and felt that I could still go slightly quicker with a better start. So on this occasion, knowing it is harder to carry on knocking massive chunks of time off PBs was hoping for around 50 minutes - aim for the 5 minutes per km and if I miss it a bit, I still beat my best time. Routines followed...coffee, stretch, flapjack and this time I decided to take an isotonic gel beforehand along with the 500ml sports drink (SIS). Set off, feeling fine, weather's good. Dull, cool and with it being early morning, quietness is important. Social distancing is still of huge importance and I basically run on the road to avoid other people - cross the road if need be and  just show some respect for others. Once on the A59, there are no people - there's no pavement, just a grass verge and at times a cycle track, so it's perfect in many ways.

As I said earlier, I felt good and started quickly - uphill, but a really fast first km (under 5 minutes) and at this stage, I am blowing already. Don't know if everyone is the same, but I do struggle until I hit 2km usually. So looking at landmarks, I surmise I am on track to run a decent time. At the point at which I reach the roundabout by Northcote, the time is saying around 13:30, a minute and a half up on last time. Great - all I need to do now is match the pace of the last run and we're fine. The flat section arrives and I take advantage, accelerate a touch and when I hit the 5 km bin (!) I am on 25 minutes - it is the half way point of the run, so 50 minutes is on as long as I keep the pace up over the  next two km. These are a real slog, long, uphill and at points quite steep. This is where the quick start hurt me...I slowed down and the splits show this in terms of the pace of the next 2 km, above 5:30 for both of them. Cadence also slowed down from around 170 steps per minute to around 155. 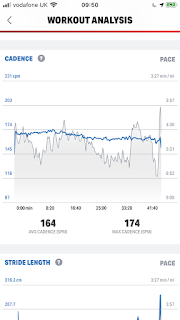 Things to work on. Once at the next roundabout, it's a right turn and head for home, 2.2 km to go and a glance at the watch. Less than 40 minutes...can't recall exactly, but I know now that most of the run from here is downhill or flat (apart from a torturous climb up Whalley Road to The Judge Walmesley!) so I will be going under the 50 minute target set, barring some disaster. Foot down time, but not a lot left in the tank so to speak. The quick start hurting me here and energy isn't great. From then I stopped looking at the watch until home and I clicked stop... 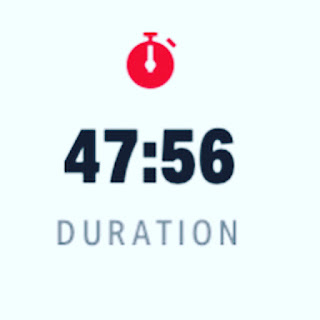 That brings me neatly onto the next section...starting to question whether or not this is it - the peak? Running as quickly as I am for as long as I am is putting certain parts of the body under some strain and physically I am not sure that I can actually run with more pace. Maybe the odd few seconds here and there, but realistically, is an aim of 45 minutes for a 10k run asking too much of a body that is a) getting on a bit and b) a bit hammered after a lifetime of sports? Would I be wiser to consolidate now? Keep this pace but extend into longer runs - ie, aim for 16k in 80-82 minutes? With the Great North Run in mind, the purpose of the training is to help me do a half marathon (21k) with as little pain as possible. I have looked at running plans etc, but none of them quite work within the realms of knowing my own body, knowing when to push and when to rest. They are all quite regimented and for me that is demotivating. Any tips from readers who have been on this journey before is greatly appreciated. I have today spoken with a friend who has run full marathons and the feedback given was along the lines of 'forget the speed now. 10k time is fine...so running at a similar pace for longer should be the goal'. It seems wise advice to me and with that in mind I have planned my next long run.

There are very few routes round here that fulfil my 'I want a flat run' brief and with that in mind, the next run I have planned comes in at around 19km - it's a long one and my longest yet. I know I cannot maintain 5 minute kilometres over this distance, but on the first time on each run, it's about setting and maintaining the rhythm and getting the nutrition right. This is a run through Whalley, Barrow, Clitheroe, past Edisford Bridge, up to Bashall Barn, back through Bashall Eaves, through Mitton, back into Whalley then home. It's not flat, but it is the nearest to flat that I can find without driving somewhere to run, which I absolutely do not want to do. So 19km... It's about 3km longer than my longest run to date, which was the 'over Pendle' so if I could manage the same overall pace as that run, would be around 1:50...that's the target time. If I can go faster, great, but I don't want to push it, as this will become my standard long run and I can work on getting the time down... Let's see how it goes. Staying fit and healthy is number one priority and there is no rush. At the moment, the run is still scheduled, so I am preparing for a September run, nearly 4 months to go. No rush. 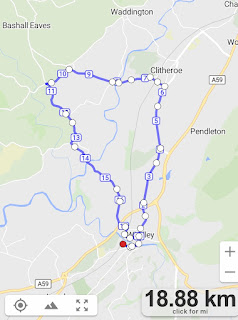