As the saying goes, no idea. After last week's challenge, I had realised that my original running shoes, whilst comfortable, light and generally great, were not really fit for this level of training. I had picked them up in a discount store in Accrington last summer for £25 as gym shoes and they have served me well. The longer this training had gone on, however, the more I could feel that they didn't quite meet the brief.

I'd been looking online for a while and knew that I needed a familiar brand for sizing purposes. Listening to friends with advice, I also knew that I should go up half a size so bravely I headed onto the Under Armour website (other brands are available) and had a look around. My first thought was obviously 'HOW MUCH???' as every pair that looked decent was over £100! The language kind of lost me...if you don't know what type of runner you are, how do you know if the type of runner these are aimed at is appropriate? Eventually, I settled on a pair that sounded from the description like shoes that actually could make me run faster - magic! I then went back into a well-known search engine (they don't need advertising...the brand is now a universally acknowledged verb!) and typed in the trainer but added the word 'cheap' to the search. Top tip... The first site that came up behind the official UA site had the same shoes advertised at £45. Less than half price - having some of that, but whats the catch? Only got size 15 left? All sizes available, I added to the cart and added half a size to my usual size, as advised. At that point, I decided to have a poke around the site and the amount of bargains was amazing (for anyone who likes good sports gear and likes a bargain, get on sportshoes.com). I also added a long sleeve compression top to the cart and checked out. Three days later, the shoes arrived. Like a child on Christmas Day, I opened the box and there they were...trainers, but not only trainers, once that would make me run more quickly and glide across the ground. Maybe. As I opened them, I noticed a symbol on the inside of the shoe... a symbol I recognised... Bluetooth? What sorcery is this? I had no idea, but the shoes had a bluetooth insert which would measure stride length, cadence (yes, I had to look it up too), pace, average pace and would work with an App called 'Map my Run' to produce all sorts of data and analysis. Maybe they would make me run fast as the app also has a 'live coach feature' (turned it off...annoying and needs me to take my phone out with me).

Only one thing for it, go for a run...no phone, just magic trainers and a new compression top (which I believe keeps you cool and warm as required? Weird). I got up early one morning, set my work up for the day...you know the drill by now. Coffee, flapjack, water, stretch, run. Running with my Versa is generally accurate overall but as I shorten my stride uphill it makes my uphill running look quicker and my downhill slower - would this be different? One way to find out - an up and down run. I didn't have long, so went on a route that I had walked a few weeks ago and was just over 7k - roughly 4 1/2 miles, with a mix of flat, then uphill then downhill. Obviously at the time, the information is stored in the trainer itself and when I got back I couldn't wait to get my phone, fire up the app and see what it said. I felt ok running, still feeling relatively injury free and strong (for me) and got home in just over 35 minutes - a good pace for me and probably the fastest I have run for a distance of over 2 miles. 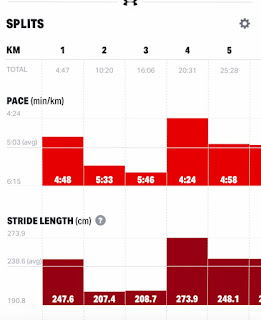 Accurate splits! A decent first km - the first time I have gone under 5:30 for the first km... ou can see after that there is a sharp uphill section (for those who know Ribble Valley, Wiswell Road from Whalley) then a really quick one (down into Barrow) and from then on, all were below the 5m km. Stride length is interesting and one I have to watch. On flat runs, I seem to be around the 250cm mark, which is about 20cm further than it should be, so that's something to keep an eye on and control more. Increase cadence to increase pace. I got all sorts of other graphs and information: 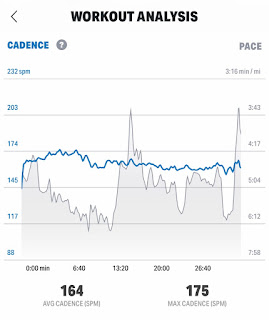 Steps per minute...I don't know what I should be aiming for to be honest, but the relative consistency of this is the most pleasing aspect really. The grey behind is the pace, so no drop off as I go either uphill or downhill. All I do know is that increasing the cadence will be the key to increasing my speed. 5 steps per minute more with my stride length would give me an extra 5.5m per minute, 10 would give me 11m per minute, so over the course of an hour, I could increase the distance covered by just short of a kilometer. How I do that is another story, however. I will use the 'virtual coach' to help me more! Last one...anybody any idea what this means? Sorry...by means, I don't actually not understand it, but what to do with the information about the angle my foot is at when hitting the ground? 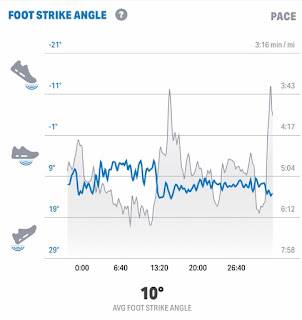 Looking forward to getting out again this weekend. Probably going to do a 10k and try to beat the best time I have had on that run so far. Three occasions I have done that... went 1:02 0:56 and 0:52 roughly, so the big question now is can the magic trainers make me run faster? Only one way to find out!!!